In 2012 I blogged images of 114 actors, directors, playwrights, producers, dancers and production members who are all artists working in the theater industry in Seattle.  There are more to add to that 2012 total of those photographed, but for the purpose of this post, I’m keeping the numbers and individuals a secret until their blog posts go live during the next couple of months.

#1 Lewis Black flipped me off!

This was the first big set and celebrity I had ever had the opportunity to photograph and I was shaking in my shoes during the first part of my 2 hour and 18 minute shoot with the comedian.  By the time we went outside for a casual look of Lewis on the Seattle city streets, I was feeling a little more brave and got sassy with him.  He flipped me off. 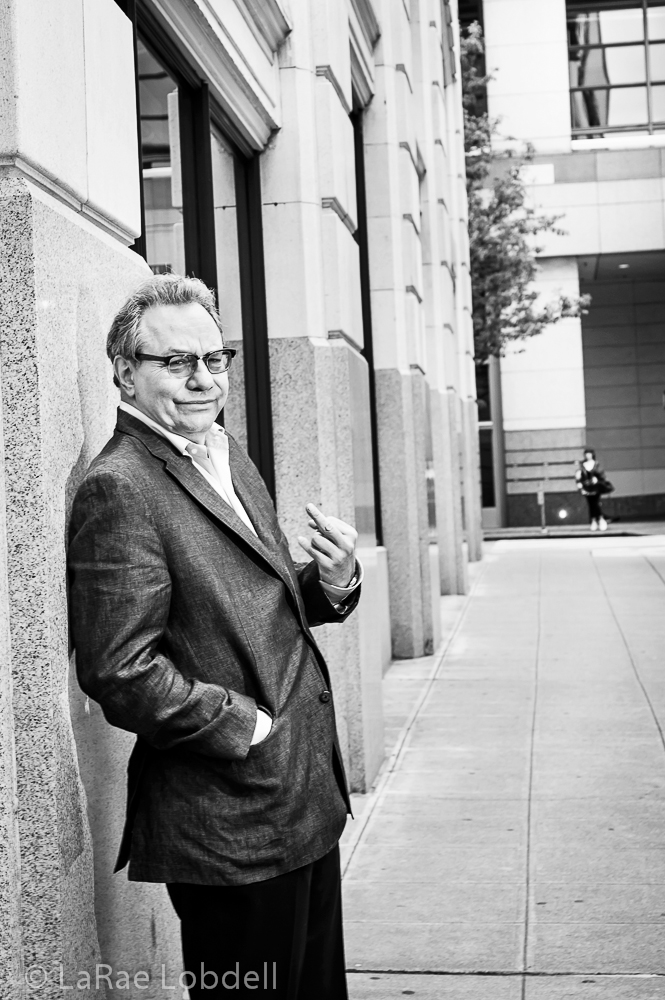 Lewis Black as playwright of “One Slight Hitch” for ACT Theatre: Full Feature at: https://photosister.com/2-hours-18-minutes-with-lewis-black/

At the beginning of my 2 hour and 4 minute shoot with actor, Trieu Tran, I knew we could do better than portraits down at the water front.  So with ACT’s director of marketing and public relations manager close on our heels, I quietly asked the actor if he would be willing to jump a chain link fence and dodge security to get shots on the train and tracks.

I love so many images from this set, but my favorite surreal moment was capturing Trieu quietly between one stationary and one moving train. It’s one of my favorite shots of my career. 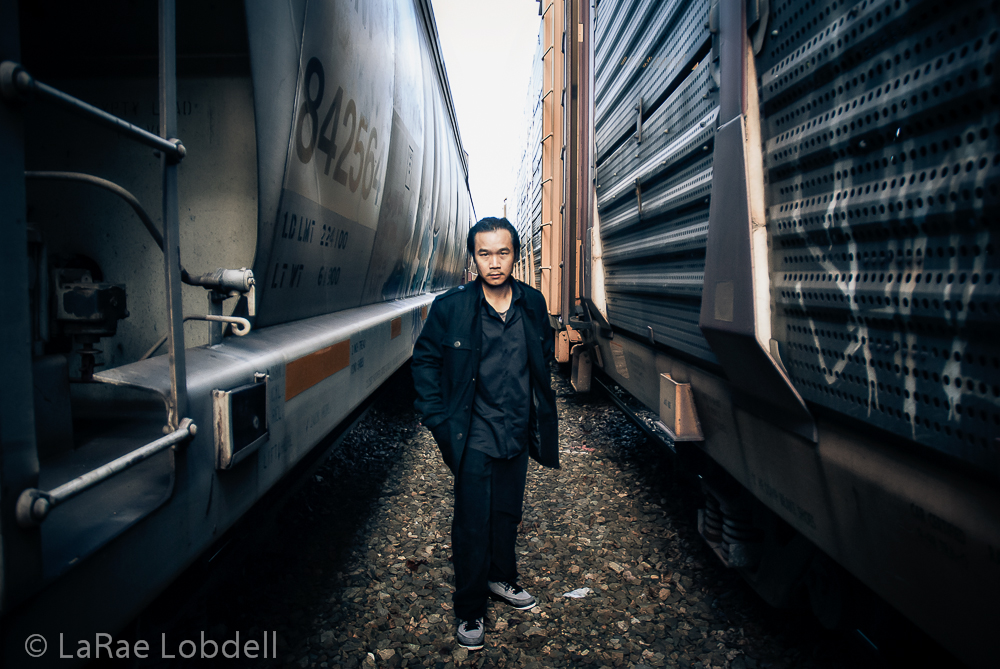 #3 Taking a photo of Dan Savage that he liked. A lot.

I had 11 minutes to shake Dan Savage‘s hand, stop myself from shaking, direct him where to sit, do a quick lighting test, and then get him smiling to capture a selection of images the writer and director of Miracle! would approve of.  To start our conversation, I asked Dan if he usually liked having his portrait taken. He replied firmly “no.”   So my A-type personality kicked in and I was determined that not only would I capture an image he would approve of, but he would really, really, really dig it.

Within a few minutes I had a selection of images  I shared off the back of my camera.  Dan was so happy with them he asked me right then and there if he could use them in his marketing.  It’s currently the cover image of the official Dan Savage Facebook page and many more current article bios across the nation. 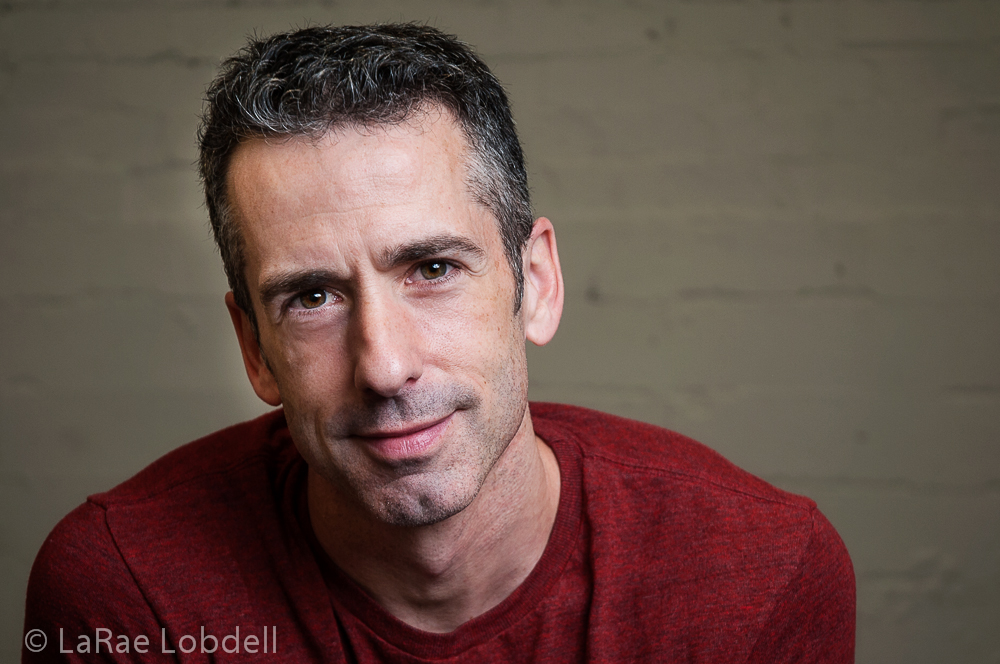 #4 Over the fold, baby! My first image that ran on the front page of the Seattle Times.

It was my first set of one this scale. City permits delivered in hand moments before we were to start setting up, 5 hot hot hot actors in gorgeous hand made silk costumes, 8 production members (including ACT Theatre’s Artistic Director Kurt Beattie who studied me as I directed the set) and my photography team of 7.  A total of 18 artists all working together quickly and efficiently.  I’ve never been so proud of any photography team than the one that helped me on the 55-minute-timed-set of Ramayana for ACT Theatre.

We photographed next to waterfalls that completely drowned out my voice within 3 feet and the actors were 20-50 feet away from me atop cement blocks, high above the ground below.  I went in close to talk to each person individually, then pulled back to my spot and completely directed every single expression, body pose and hand gesture by mirroring (it was like playing a high-stake game of charades).  I woke up three weeks later on a Sunday morning to friends’ text messages and photos of the front page of the Seattle Times. I had had no idea the image ran. 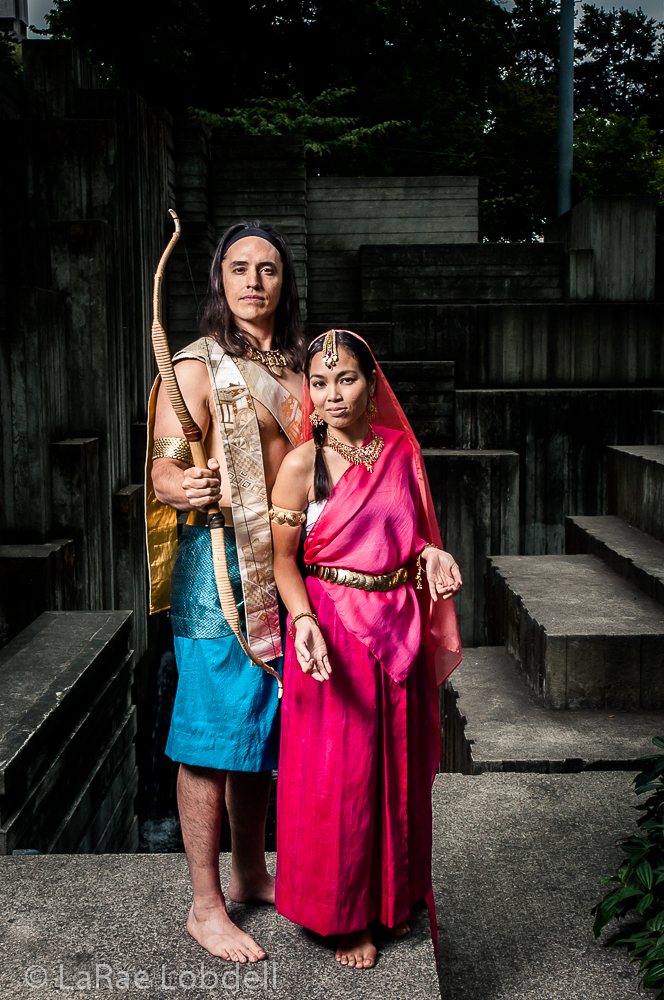 #5 Capturing The Pinter Festival with The Board of ACT Theatre watching on.

One set.  One conception.  Eleven actors.  Eleven minutes.  And the Board of ACT Theatre entered the room at the beginning of the set.  No pressure!

With our set up time cut to a fraction, my a photography team of 2 (that’s including myself) and 1 representative from ACT  got everything in place just in time for The Board to enter the room.  The pressure was high and I got every single head-tilt and finger in place for a very specific concept from the client.  The shoot was successful and the images from this shoot have been published in: CBS Seattle,  The Seattle Times, The Stranger, theexaminer, City Arts Magazine, The Sun Break and more. 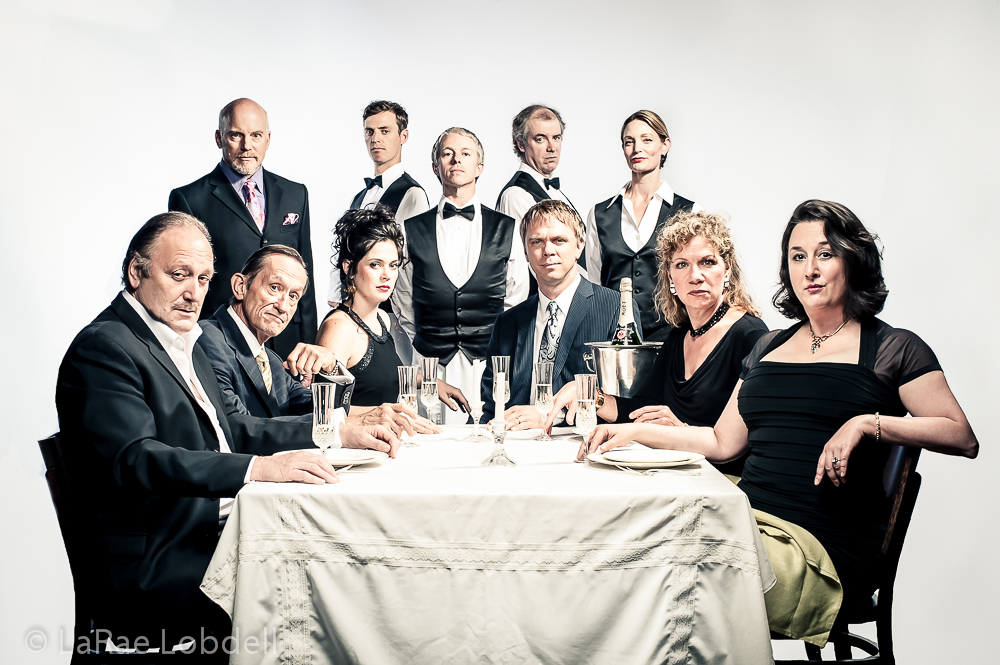 I wanted to capture a noteworthy, iconic, image of  Dan Savage’s drag queens from “Miracle!”

Photographing sexy women on cars has always been a classic (and favorite) shot among photographers, so I decided to do my own version with a twist.  A call out on Facebook the evening before the shoot brought a vintage car to the set. With a photography team of 5 and just a few minutes with these hilariously fun and outrageous actors before they performed their matinee performance just a moments away, I captured the hot, sexy, actors in drag on a beautiful 1972 Corvette Stingray. Perfect. 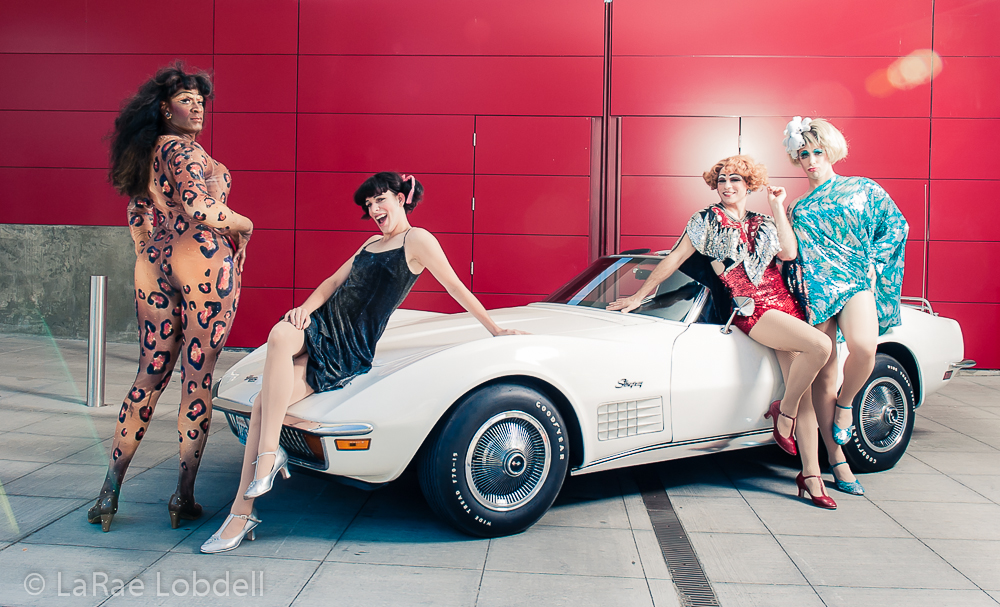 This was one of my favorite images and moments from the hot summer shoots.

Four, beautiful and talented women who were absolutely phenomenal to work with and who completely kick ass.

#8 Capturing the Kittens before closing night.

With the summer months slipping through my fingers as I photographed artists all over town during the week, weddings on the weekend and live chat hosting for creativeLIVE, I almost missed capturing the sultry artists of “Kittens in a Cage” performed at Annex Theatre.

With only a couple of days notice, the ladies coordinated their schedules and met me at my studio for an ally shoot at dusk.  The women were strong, confident, hot and at the top of the scene. The kind of women that make rooms stop. Yah, it was like photographing rock stars. 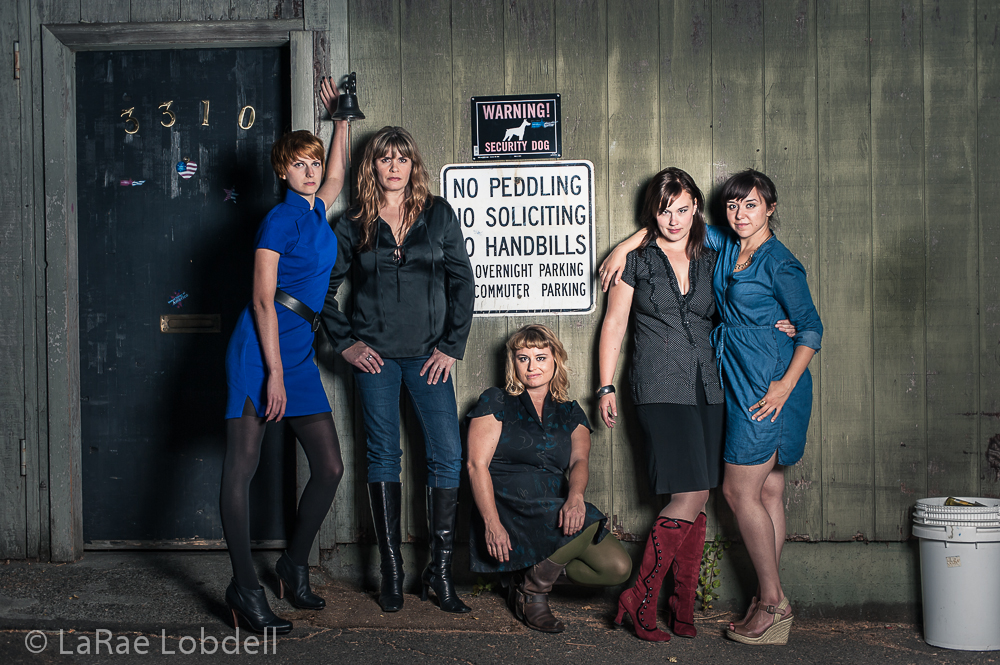 #9 Directing a Director. My time with Joe Grifasi.

Honestly, photographing directors is one of the most rewarding experiences as a photographer, but especially in this case.  You see, Joe has also been an actor in films (The Deer Hunter and Natural Born Killers to name a couple of my favorite) so he knows what it’s like to be both in front of and behind the camera.  His experience of being in front of the camera has made him a genius of  understanding people and  being able to communicate what he wants for the scene.

Joe took the time to share with me a few extra things I needed to know to better photograph actors.  I’m so grateful for him. 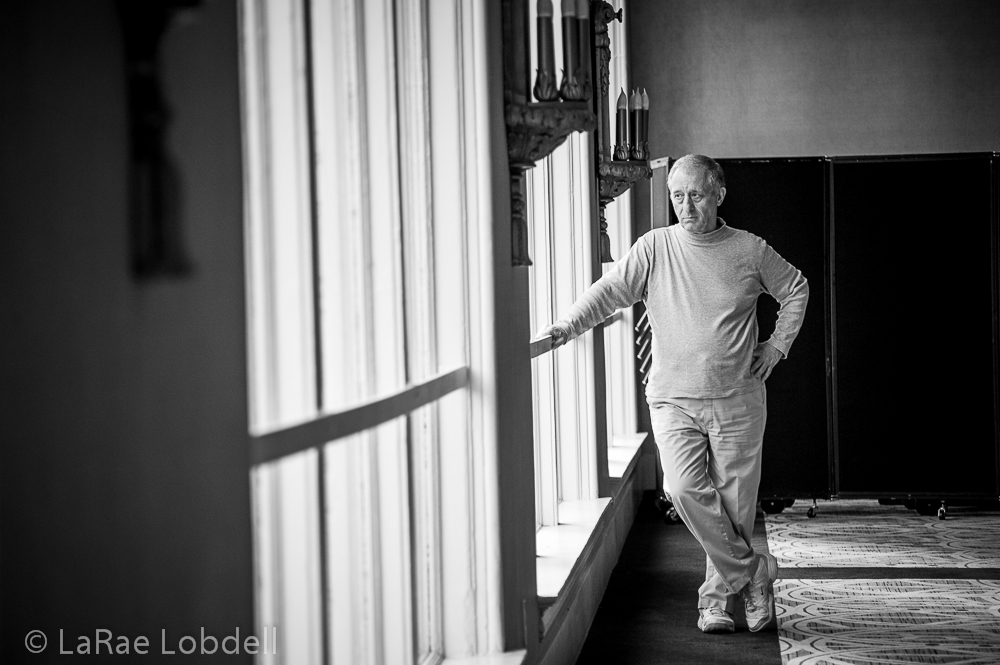 Playwright Tommy Smith invited me to come to his home in New York to photograph him for his upcoming project “LOTUS EATERS EP” with Reggie Watts.

To gain access to the very cool and spacious private back yard, we crawled through his bedroom window.  While we were doing light tests, a sweet old woman yelled at us in an unknown language through barred windows opening to the desolate courtyard.  I turned around and she was holding her flip phone out to me through the rusted bars.  After a few moments of pointing and gestures, I realized she wanted me to help her change the battery at the back of her new phone.  After popping in the new battery, she  thanked me with a big smile and patted my hands through the steel partition of separation. We were not so separated anymore.

Turning my attention to back to Tommy, I simply murmured, “I get it now. Why you like New York.” He gave me a look of understanding.  A few moments later we captured this image in natural failing light.  There was no pretense or character development needed here. Just pure honesty.

It’s my favorite image of a single artist I’ve photographed to date. 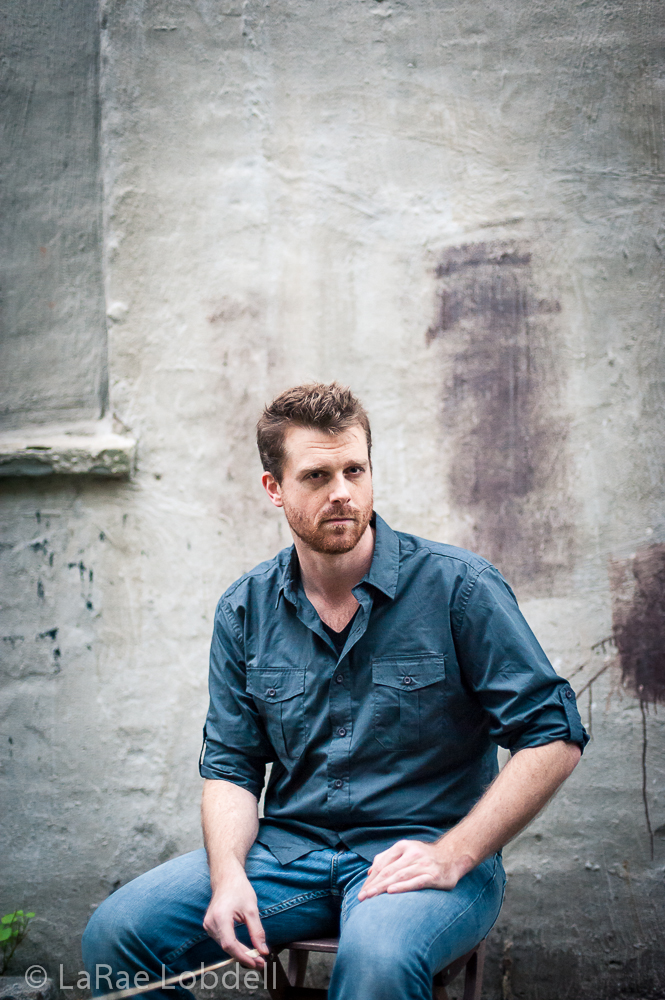 #11 Capturing the man who brought Intiman back. And gave me a chance.

The first time I met Andrew Russell, Artistic Director for Intiman Theatre and director of “Hedda Gabler,” was at a coffee shop when I pitched to him the idea that my personal project of featuring photo editorials of artists in the Seattle theater could benefit and elevate Intiman Theatre during it’s comeback year.  I think one of his first responses was something to the effect of “cool, free headshots!” Rather than let the Artistic Director know that I don’t really shoot traditional headshots, I simply agreed and got to work setting up scheduling the entire cast, directors and production team leaders over the next two months.

My favorite moment of photographing Andrew in his home was when I finally got him to smile.  It’s the true, honest, smile that lights up the heart of all those around him.

Andrew Russell was named “Most Influential” in Seattle magazine’s Best of 2012. 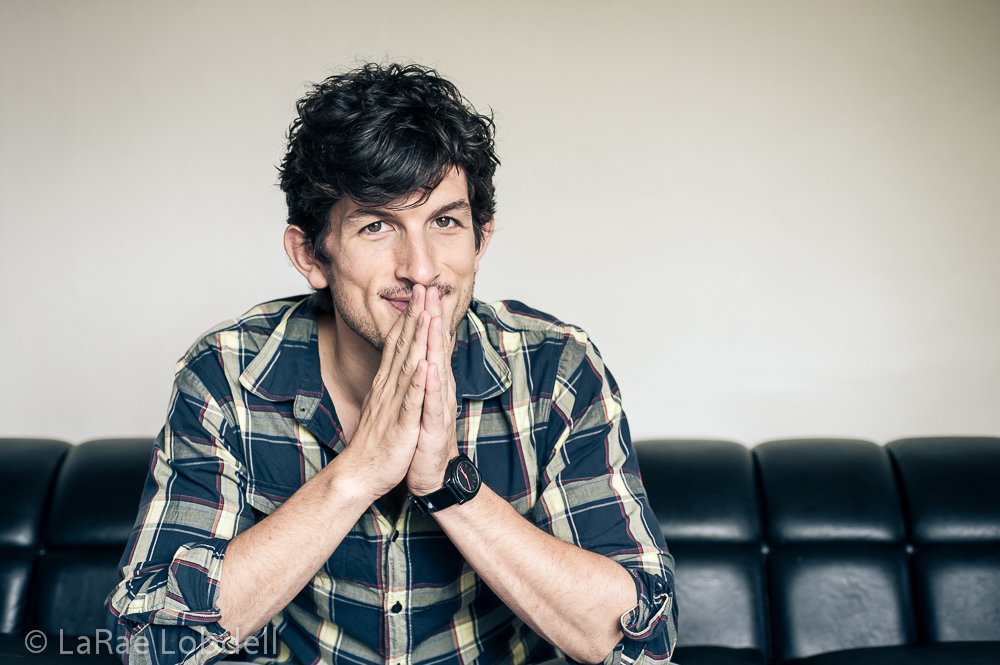 Washington Ensemble Theatre members were so gracious to open up their theater and bring items from their own home for props.  It took us a couple of hours to set up multiple sets on stage: one for individual natural light shots, one for individual set lights, and the last configuration for an entire group shot with different lighting. Everyone was so kind and awesome the entire time and brought their best energy for the fun day.

Every single person associated with WET has been so incredibly supportive to this project. Their incredible team spirit and love for the arts is so contagious! 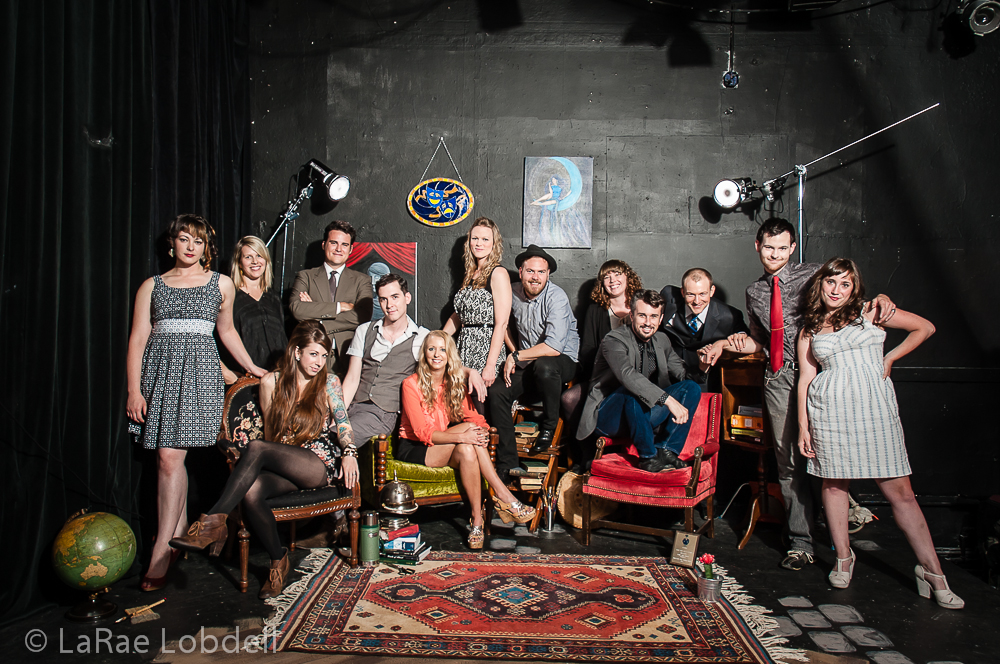