Behind the Scenes of “Celebration”

Behind the Scenes of Photographing the artists of The Pinter Festival

As described in my initial post 11 Minutes with The Pinter Festival, this is MY year of “YES.”  YES, I’m about to show you the storyboard given to my by ACT, my Lightroom 4 process settings, PS CS5 layers, and also a small slice of my process going through this experience.

The images from this shoot have been published in: CBS Seattle,  The Seattle Times, The Stranger, the examiner, City Arts Magazine, The Sun Break and more, but I’m going to concentrate on just one image in this post.  They were all captured at the same exposure so all my post development were the same (minus dodging and burning in specific areas).

One set.  One conception.  Eleven actors.  Eleven minutes.  And the Board of ACT Theatre entered the room at the beginning of the set.  No pressure.  Here is how it went down:

With less than 24 hours before set up time, lighting expert Ian Spiers (aka cL-Ian from creativeLIVE) and I met with ACT Theatre to go over the details of the shoot.  I was given a copy of the script and instructions on capturing one dynamic shot that the client was looking for to release to Seattle press.  A teaser image was to be provided to the client within 24 hours,  the rest within four days.

Here is the storyboard ACT gave me: Initially, the shoot was going to be a few actors around a table in character for the play “Celebration” by Harold Pinter.  There ended up being a total of 11 actors in the scene, changing the lighting schematic drastically (thankfully we were armed with a ton or Westcott gear including my Westcott 43″ Apollo Orb andWestcott 28″ Apollo Flash Kit).  And our ultimate challenge ended up being that the room we were to have 1.5 hours to set up the lights was being used for rehearsal, so we ended up with 30 minutes for the entire set creation. And I mean, we set everything.  While Ian rocked out the lights, I placed the table and chairs in the center of the room, dressed the table, including proper placement of silverware, champagne bottles and glasses, dinner and salad plates and rocked out the backdrop to accommodate additional subjects in the shot (a HUGE shout out to  “Dumb Waiter” and “Celebration” director John Langs and ACT’s PR Manager Mark Siano for helping me with that gigantic backdrop!). 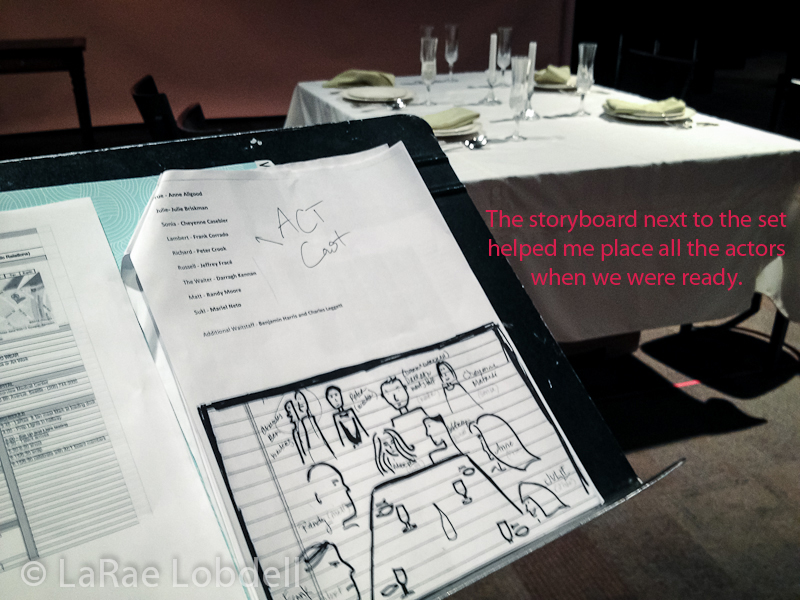 Cleaned my gear out of the set and started test shooting while the actors in full costume entered the room and watched, waited and popped open champagne. 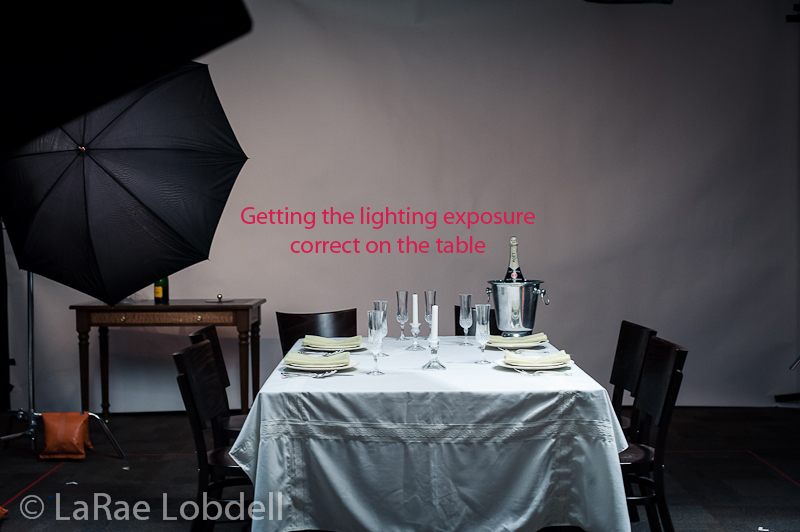 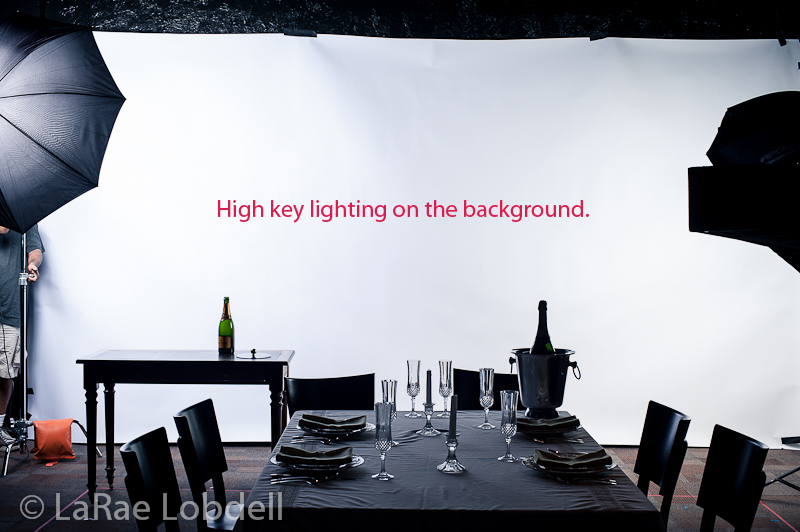 By this point, not only were the 11 actors, director, numerous production and staff and head of marketing standing around waiting and watching us sweat bullets through the set up, but then the board of directors of ACT Theatre entered the room.  They arrived before we started, but had been timed to enter at the end of the photo shoot and celebrate the upcoming Pinter Festival and mingle with the cast.

I’ll note here that during the entire set up process, bottles of champagne were opened and I did take the time to go over and talk to everyone thanking them for their patience and ensuring them that once the lights were dialed in, they would all be guaranteed to look absolutely stunning and that I work quickly and efficiently so that they could join in the festivities.

Here is where I’ll add video as media to this post.

From Ian’s footage, you can get the idea of how I work: direction, direction, direction. Every single person was asked to move and tweak their bodies and limbs the entire 11 minutes I worked with them.  Every one of them was given a purpose in their character that would help give a feel and look to the concept requested from the client (remember, I had been given the script the evening before and had read it to give me insight of the character dynamics for this exact moment). 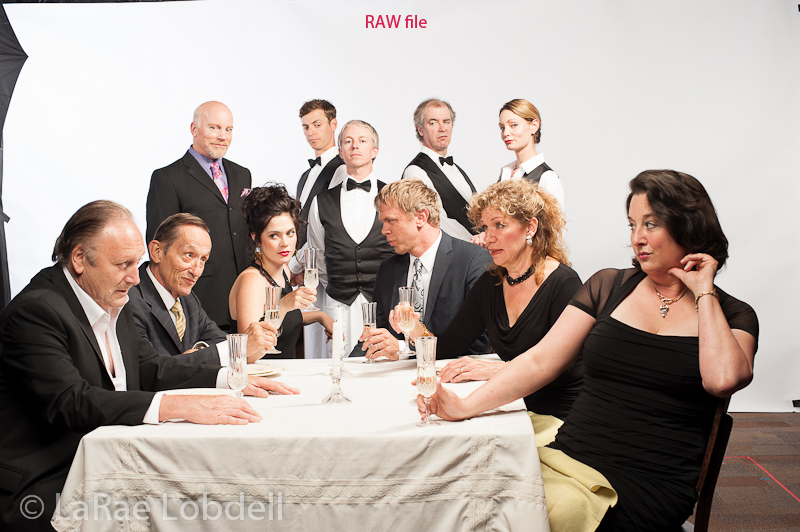 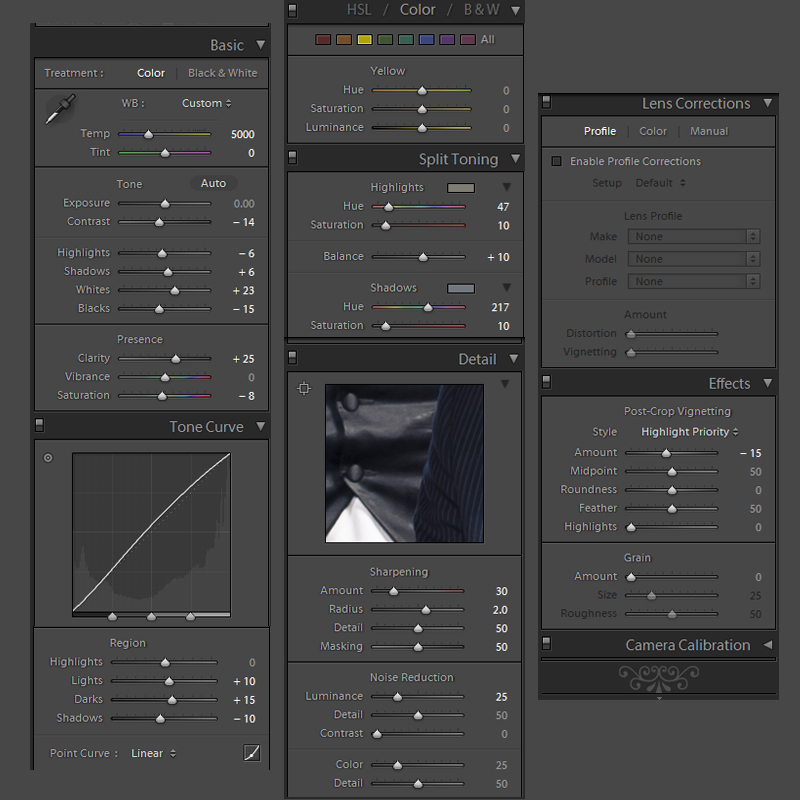 A slight crop then lightened and darkened ares on the table cloth: The PSD  was pulled into Photoshop CS5, where I took out the umbrella (as much as I love my Westcott  gear, it couldn’t be in the final image) on the left and filled in the carpet on the bottom right with the “white backdrop”.

How I did this was I selected an area of the white backdrop with the marquee tool, copied and pasted next to the area I wanted filled in. I then used the eraser tool to erase any of the new white area that overlapped the original image.  Two layers to process this step: one for the umbrella, one for the carpet. 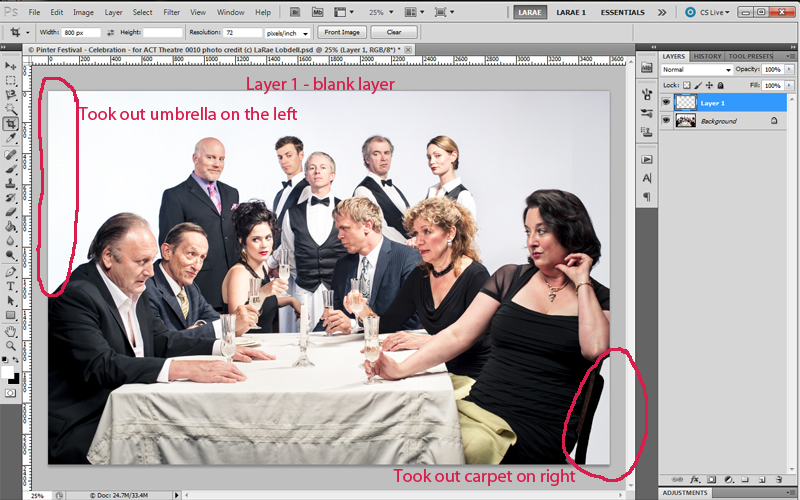 The next layer I added was a blank layer that was my “softened skin” layer. When I soften the skin I do NOT take out wrinkles, just softly diffuse them.  I also took off a tiny bit of shine from a couple foreheads from the lights.

How I accomplished this was to add a layer, select clone stamp tool (mode: normal – opacity 20% – flow 100%), and brush over the areas of skin I wanted to soften.  You can tell that I do not over do this process. 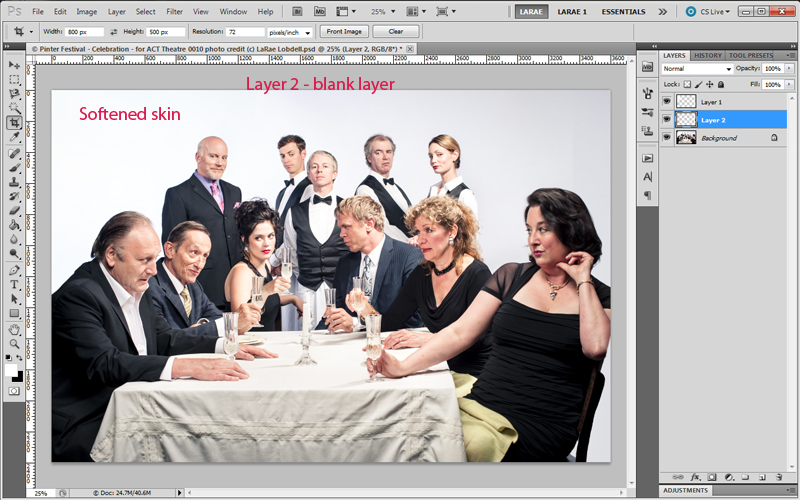 The last action ran in PS5 was something I absolutely could have done more in LR4 but ended up doing at the last second in here as I didn’t want to go through my layer creation process again. I ran Totally Rad Actions “Yin and Yang” to dodge and burn the areas you see below: 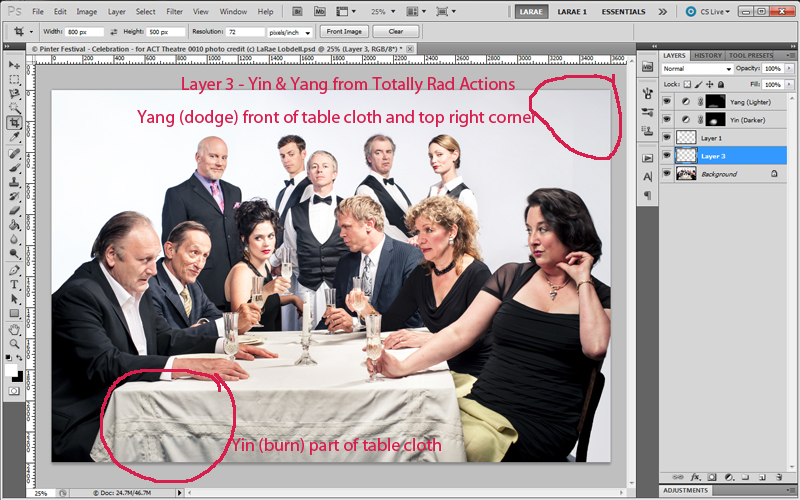 And the FINAL image select delivered to the client: If you have more questions about this shoot, feel free to hit me up here or on the Facebook post.

Go see “The Pinter Festival” at ACT – A Contemporary Theatre

One thought on “Behind the Scenes of “Celebration””