Perhaps it was a coincidence that it was just after I got to be a part of the Jack Hollingsworth‘s creativeLIVE class on iPhoneography, but soon after I purchased my first iPhone, people started asking me how to approach capturing images with their smart phones in a more serious manner.

It was that topic on mobile photography that brought Paul Budraitis and I together over whiskey one evening. During our conversation, I learned more about Paul’s professional life in Seattle: how he directed contemporary theatre in Lithuania for seven years (with director Jonas Vaitkus) and that he teaches acting and stage movement at Cornish College of the Arts.

He spoke with so much passion about directing, acting, photography, the arts. And when he spoke, my photographer’s eye saw the fantastic range of expression and spirit Paul presented. I knew we had to do a photo shoot.

Even though I try to shoot a lot of natural light outdoors, we ended up shooting the first portion of the session in the entryway of the house. I kept my lighting really simple (one speed light at a 45 degree angle to my left) because I really just wanted to concentrate on Paul’s fantastic range of expressions on a simple blue background.
[photography details below] 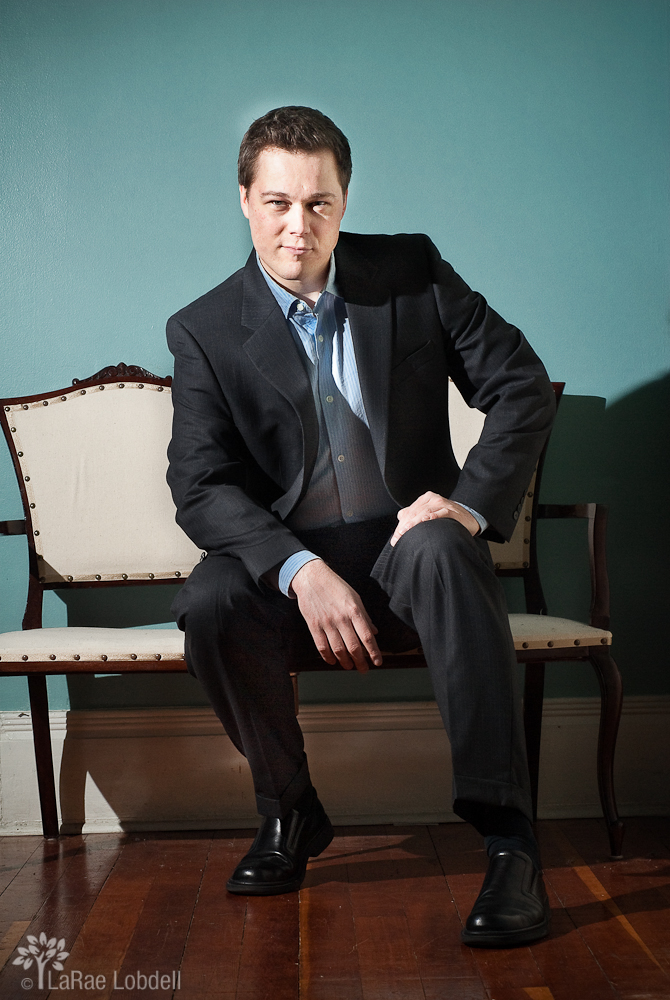 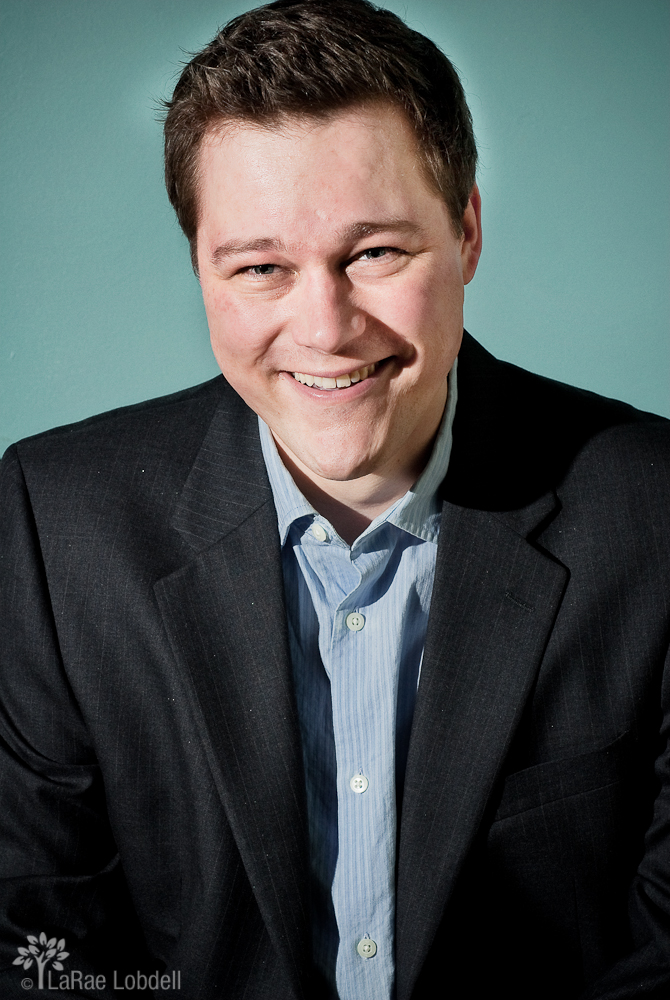 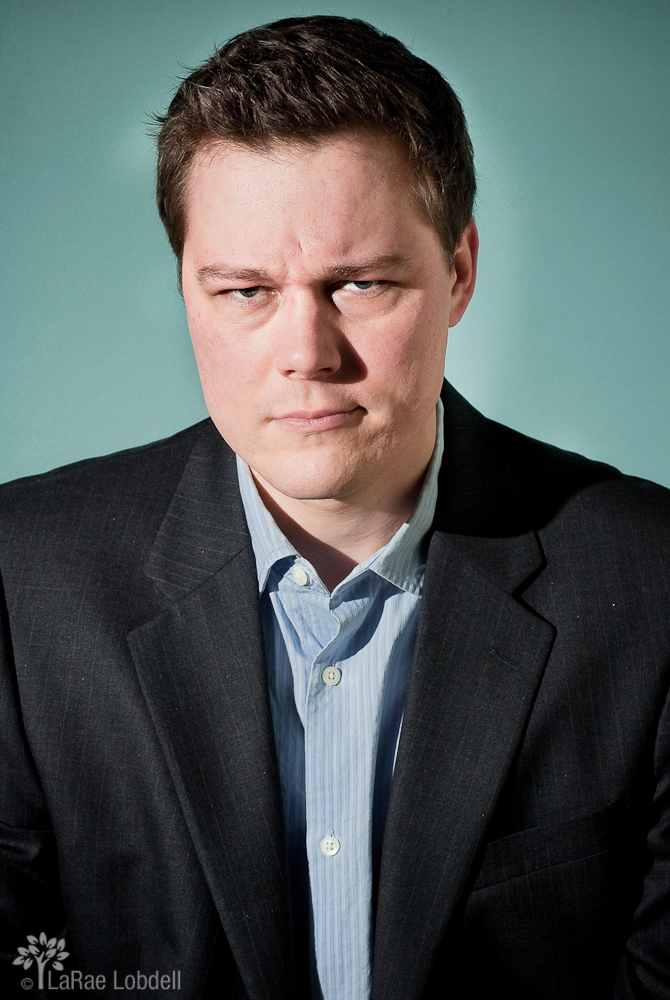 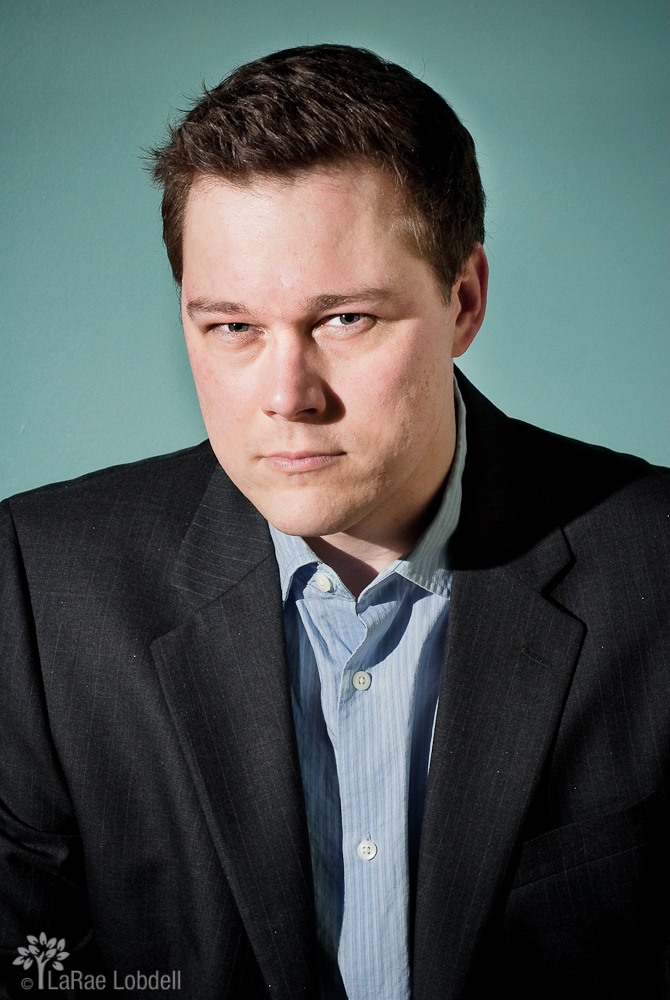 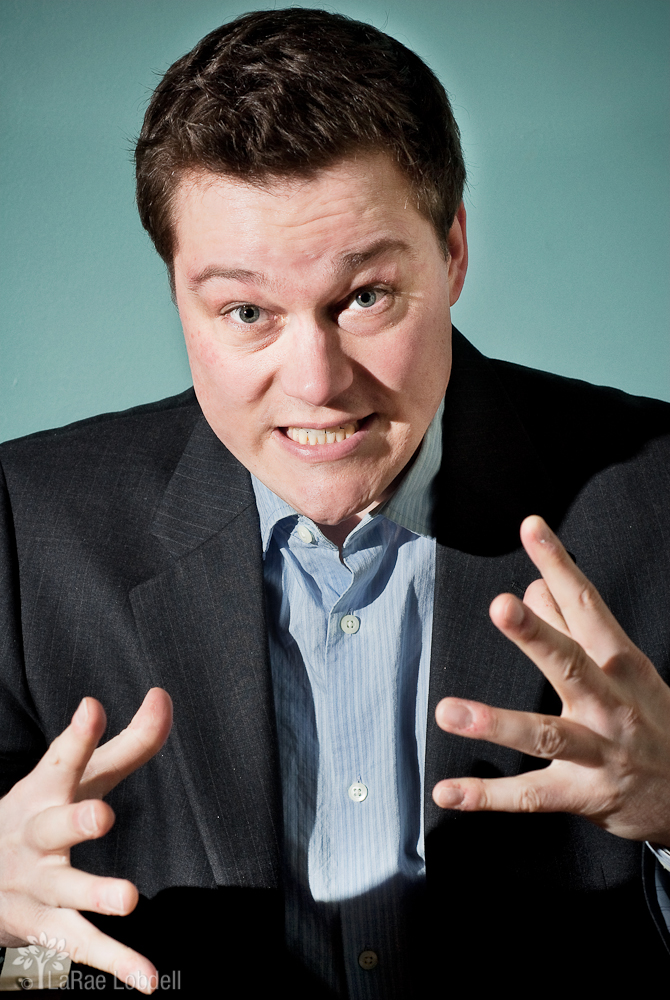 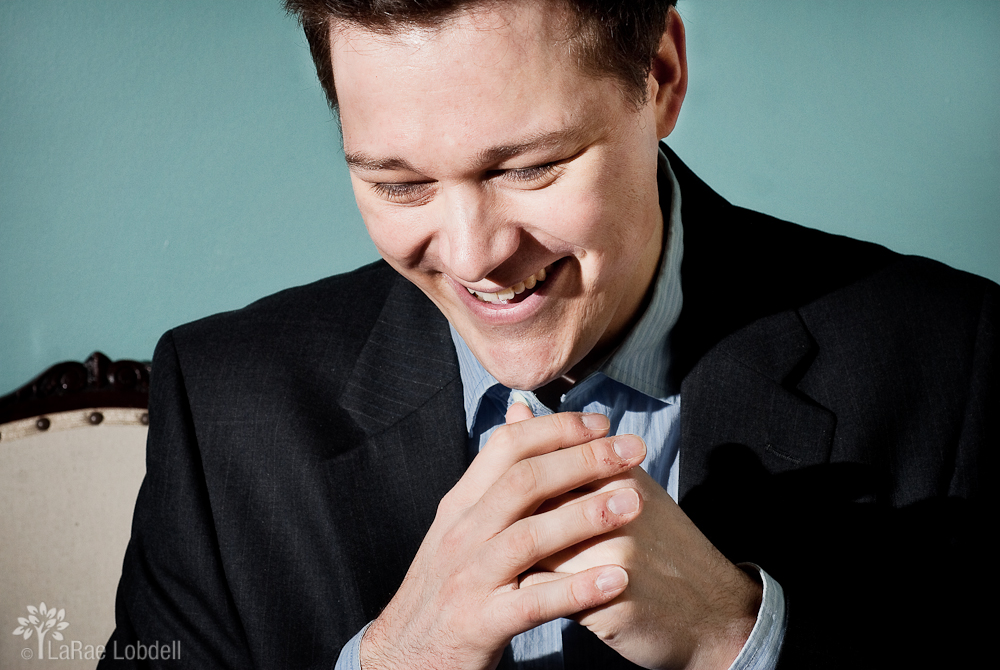 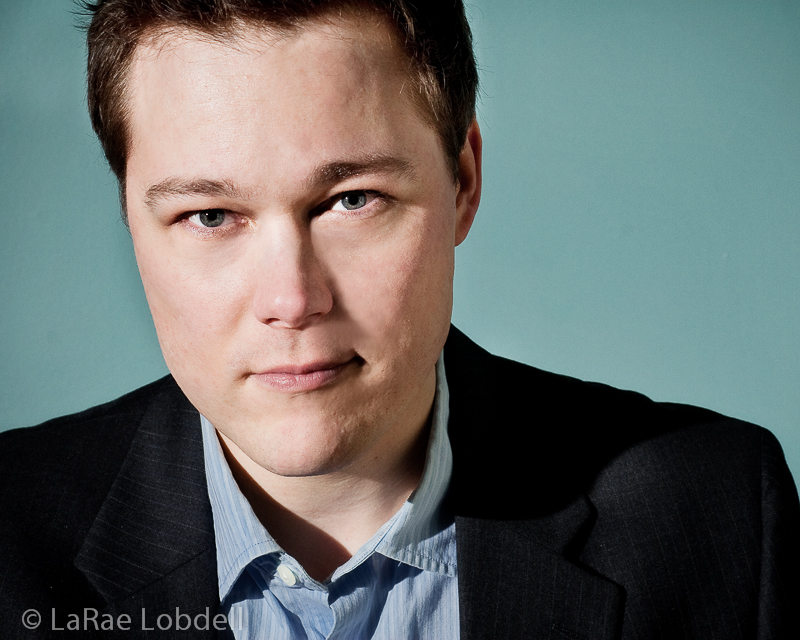 By the time we moved outside for portraits, I decided to go with a “Hitchcock” film look. I placed my single speed light at a 45 degree angle to my right this time, catching the edge of some branches of a bush causing a great shadow to be cast on the building behind Paul. The last piece of attention to detail I want to point out in this series is the butterfly art piece hanging on the building. I left it in as it helped reinforce a specific genre of film, that little bit of “Silence of the Lambs” that leaves you uncertain. 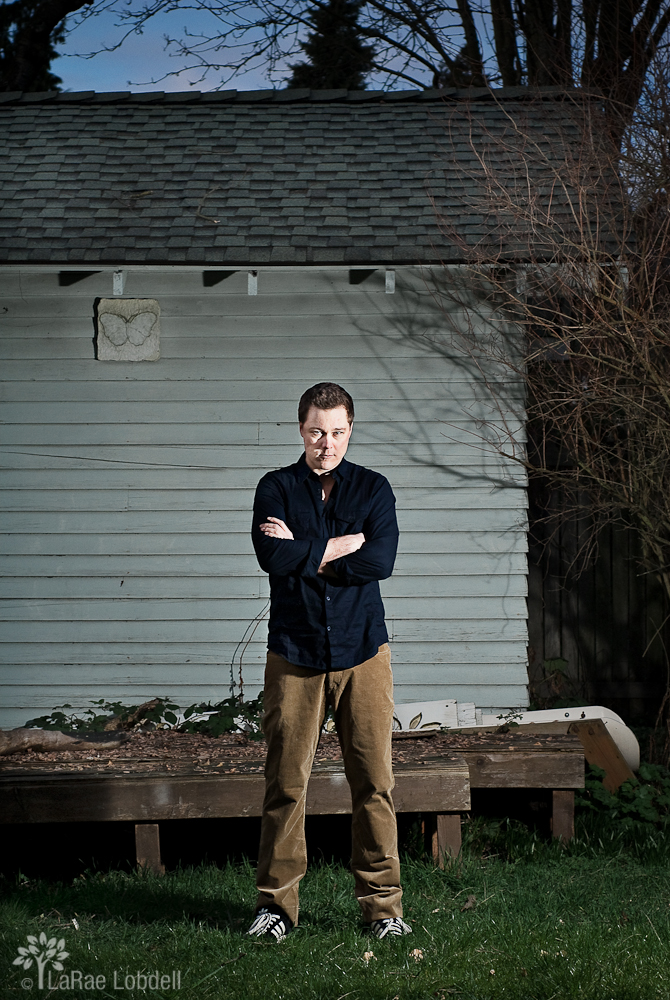 And for those who have seen the play, portrait with Baxter the Boxwood… 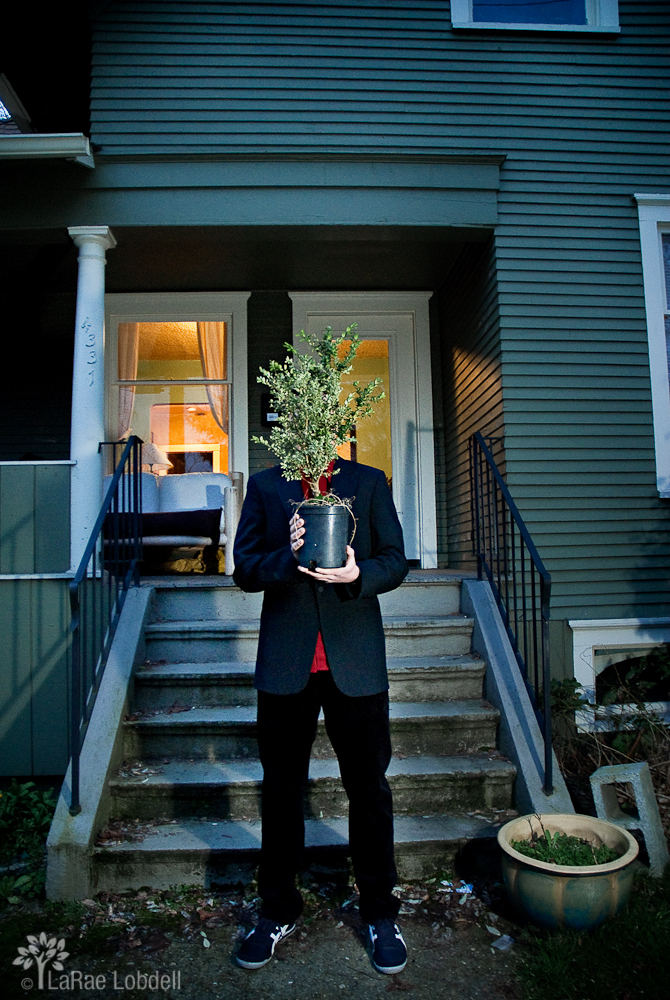 Lighting:
All shots were with ONE Nikon SB-800 flash with the Micro Apollo light modifier from Westcott on my “Eddie”, manual setting 1/4. The flash was placed at a 45° angle on either my left or right.