2 Hours and 33 Minutes with Tim Brando

2 Hours and 33 Minutes with Tim Brando

A few months ago I had the privilege of photographing sports broadcaster Tim Brando of FOX Sports for Private Clubs Magazine, a luxury lifestyle and travel magazine from ClubCorp. Tim has been a member of the magazine since 1989 and was to be featured in the high profile “People” section of the publication in print and online, with an interview by Paula Felps.

It was my first time shooting for the magazine, and Ron Thomas, their Associate Design Director, was fantastic to work with.  He gave me a thorough run down of what they needed for a great editorial portrait. Our goal was to capture a variety of compositions and eye contact, with the highlight being a vertical (portrait) layout for a final full-page feature. The only catch: Tim was going to be broadcasting live on TV and radio court-side during a Miami Hurricanes Men’s Basketball game vs. Georgia Tech Yellow Jackets and there was no guarantee of how much time I would have to capture his portrait before hand as he would be in pre-production. (This is the most essential and important part of any live broadcast, as I learned from my time on the air with CreativeLive.)

OK. So my job was to 1) capture a beautiful portrait, 2) in a couple feet of space during a live basketball game just a few inches away from very tall men running and throwing a basketball that could hit me in the head at any given moment (yup, that almost happened during pre-game), 3) be mindful of the video crew and equipment filming Tim, 4) be aware and respectful that the broadcast came first and foremost before the photo assignment (i.e. don’t distract Tim while he was working, especially while live on the air), and 5) I would not have a second chance to capture this assignment. There are no do-overs or second chances so bring your A-game. Always.

I arrived two hours early. The extra time gave me the opportunity to meet all the other photographers at the game (at least 20) and understand the industry protocol and etiquette for that specific court, meet all the security guards, get a layout of where to store my gear safely, connect with the producers of Raycom Sports/The ACC Digital Network who were airing the game, tour the mobile broadcast production trailer, figure my camera angles while receiving instructions of where I could/could not shoot during the live game and live broadcast, and get my game on.

The days leading up to the assignment I was able to communicate with Tiffany Brando, Tim’s daughter, social media manager and PR consultant, who was incredibly gracious and wonderful to communicate with. Her warm personality reassured me that her dad and the Raycom Sports/The ACC Digital Network crew would be awesome to work with, and she was absolutely right.

Tim is as kind and charismatic in person as he is on video. His rich voice has that unmistakable, natural punch reminiscent of my own dad telling me stories as a kid with a healthy side of easy laughter. They both have that familiar quality of a memorizing storyteller who can transport you to a different time and place full of exciting plays and highlights while remaining mysterious of how the story ends, so you either shout for joy or cry out in defeat for the hero. The voice takes you right there.

Back to the shoot and on to the photo feature here, we started our shoot in the broadcast production trailer that was buzzing with energy pre-show. Tim sat down with his producer in front of a wall full of TV monitors showing footage of every angle of the game, and planned out their course of action for that evening. It was pretty tight in there; the space had smartly designed workstations and everyone worked smoothly as a team, no, more like a family side-by-side. The energy was positive and productive and they were all incredibly gracious as I worked to capture a few portraits of Tim in there. Here’s my favorite:

From the broadcast trailer we went to the basketball court and he got set up with the live crew and greeted his co-host, Coach Eddie Fogler who was sportscasting beside Tim the entire night. Eddie is a two time SEC Coach Of the Year at Vanderbilt University and South Carolina and Tim asked if I would take a couple photos of them in action together for him personally (Tim is a big fan of Eddie’s). A few BTS shots of the guys getting warmed up before going on the air taken with my iPhone for social:

They went live about 10 minutes before the game opening where I was able to get editorial shots of Tim announcing to viewers watching ESFC and ESP3, getting fans excited for the game. What I really enjoyed about these few minutes is that the basketball teams and cheerleaders were warming up in the background, which gave me the opportunity to really show his true work environment: lights, camera, action! And Tim in the center of it all. My favorite shots:

After that, I was able to sneak in a few more shots during half time, which was when I grabbed the hero shot:

The original image had both broadcasters, but we cropped it to focus on our hero for the Private Clubs full-page feature. I’m showing this as a note for fellow photographers to always work the set to provide your client with multiple shots including a variety of compositions and looks, as you do not know what your art director will ultimately want:

Once I knew I had captured all that was requested and more, I took some time during the game to have fun on the sidelines with Sebastian the Ibis, the Hurricanes official mascot!

Always have fun doing what you do. And in trending 2015 form, grab a selfie!

The final image of Tim Brando in Private Clubs Magazine: 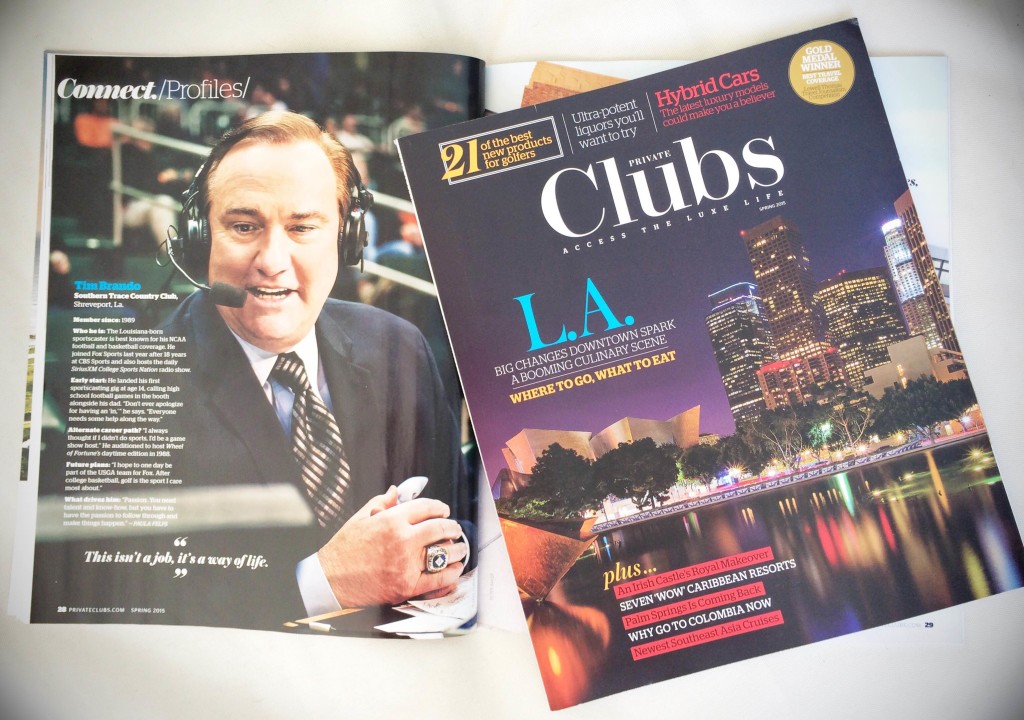 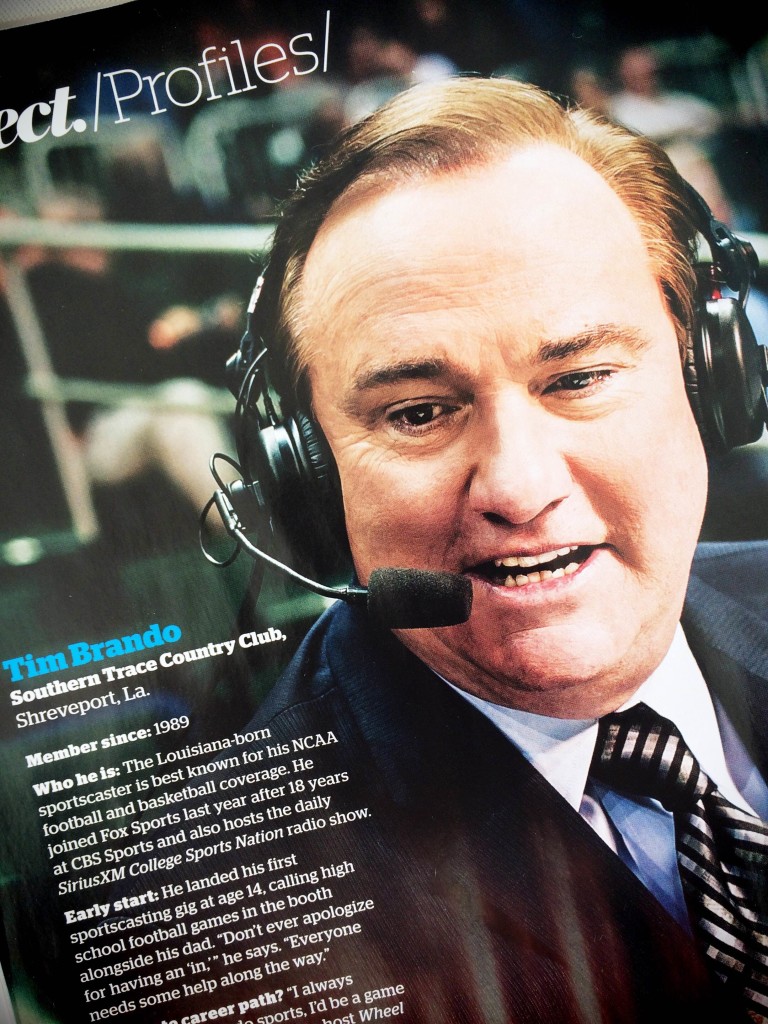 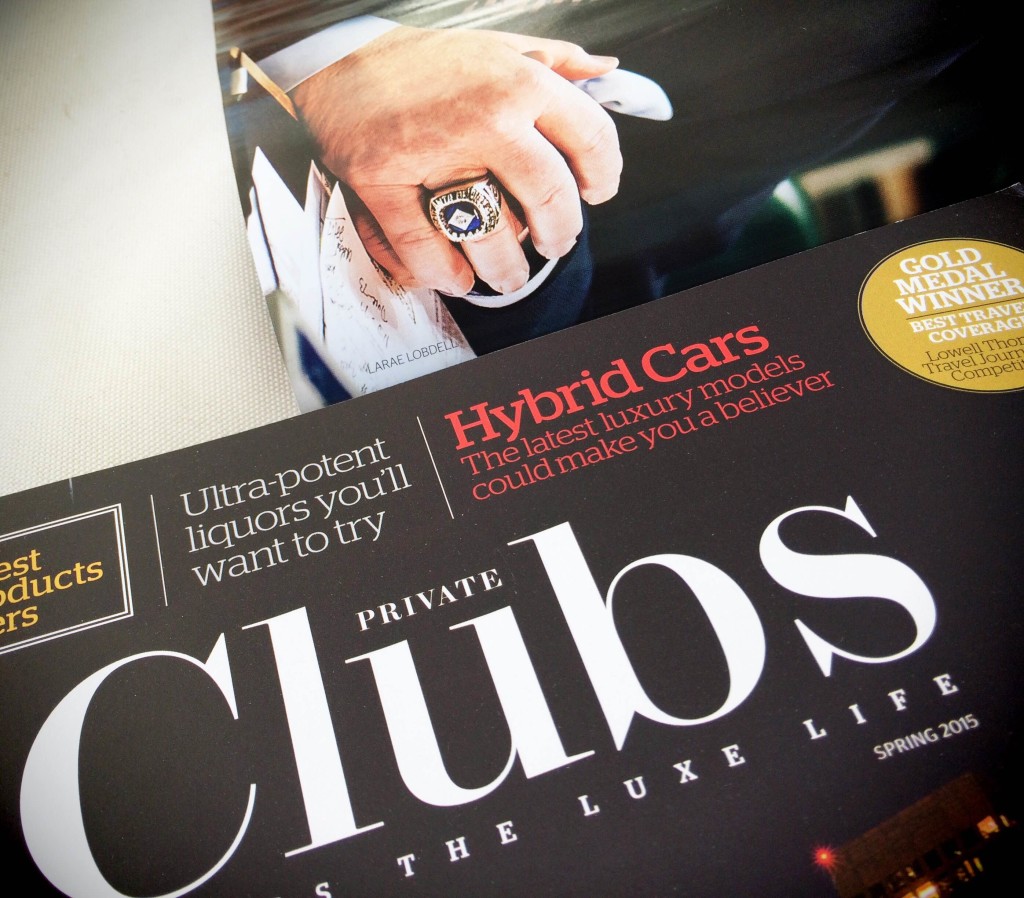 You can check out the best of the Tim Brando Show here: https://www.facebook.com/timbrandoshow/videos.

Quick gear note for my fellow photographers: I used my Think Tank Photo Airport AirStream™ Rolling Camera Bag to carry all my gear to the shoot, loaded my essential lenses and Westcott Micro Apollo 2200

softbox with Nikon Flash into my Think Tank Photo Retrospective® 10 Shoulder Bag (Pinestone), which then became my main bag court-side for the live on-camera shoot. Additionally, I was outfitted with a BlackRapid Kick Women’s Sling Camera Strap RS2SW1S  (Grey)

which is new to me and I LOVE LOVE LOVE it! Super comfy and fits my form perfectly. The shoulder padding is thicker than the RS-W1 women’s strap, which I like a lot, too.

MY CAMERA GEAR FOR THIS ASSIGNMENT: 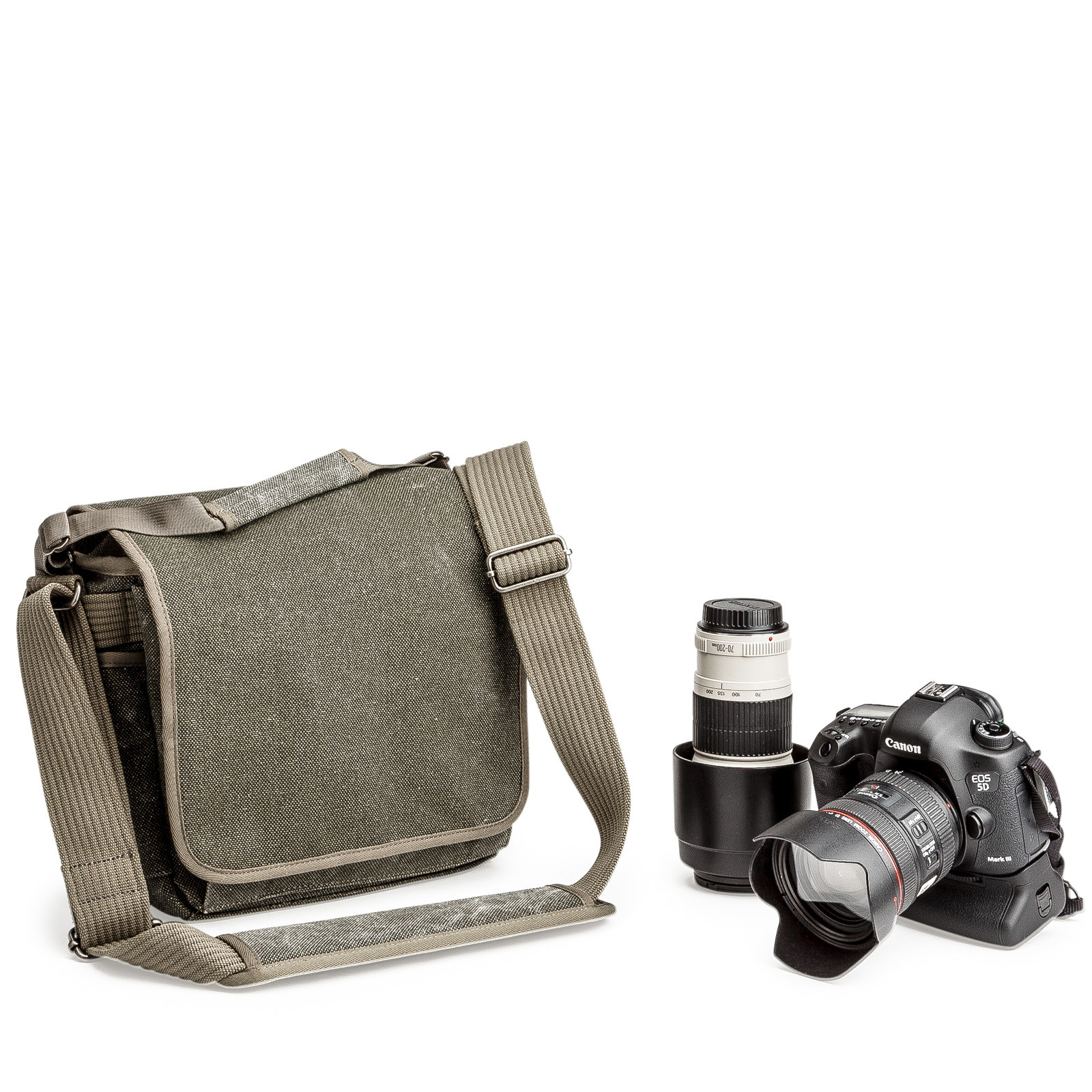 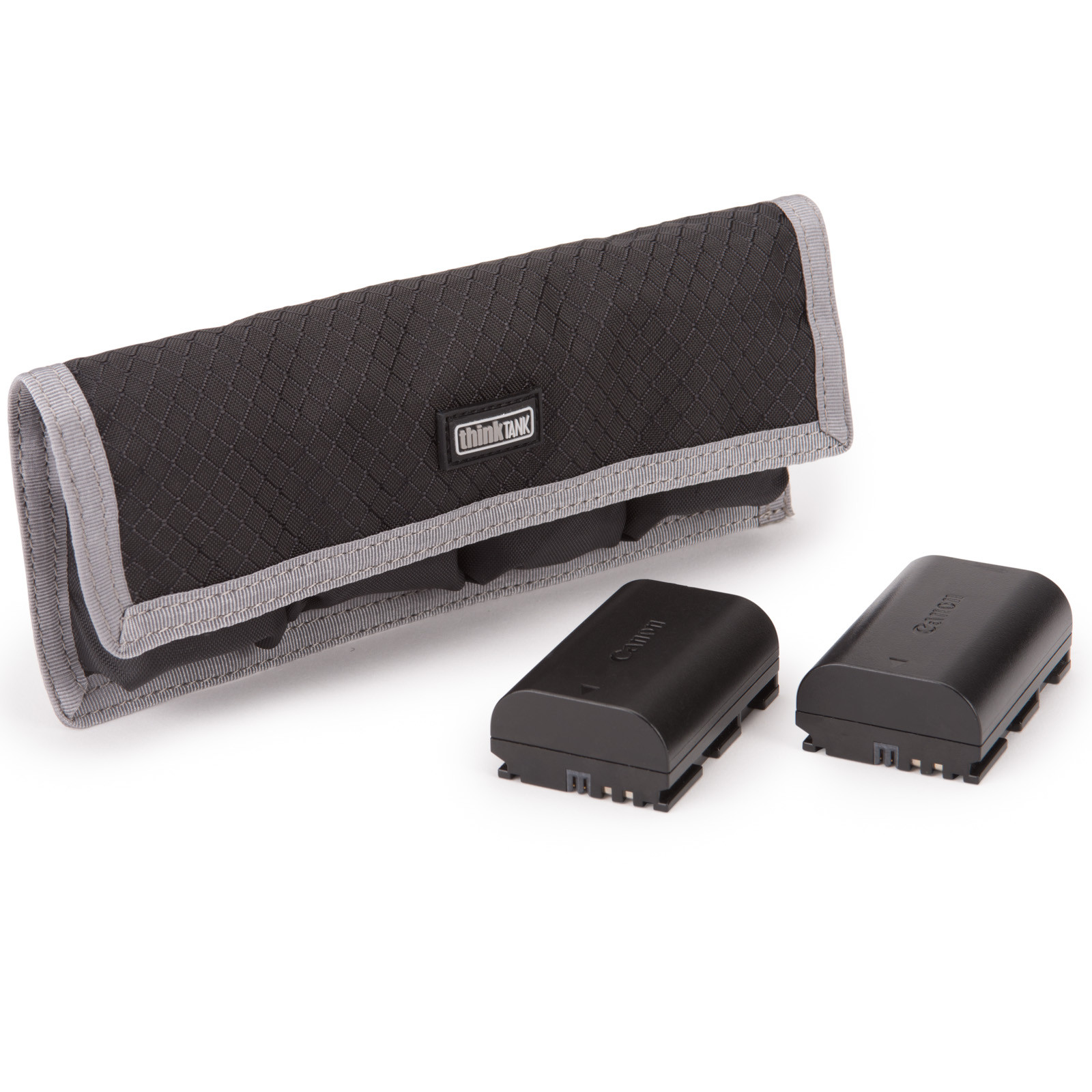